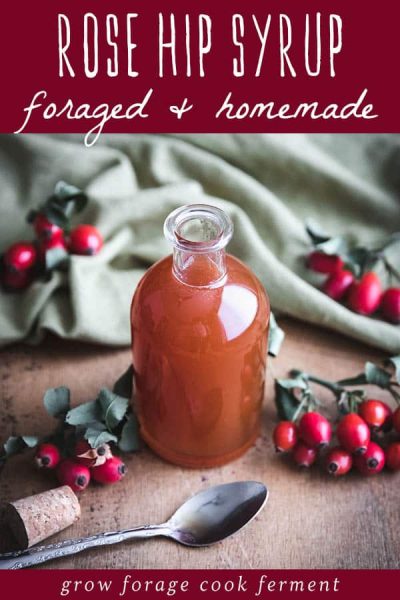 Learn how to make Rosehip syrup

Rosehips are the round portion of the rose flower just below the petals. It is considered an “accessory fruit” of the rose plant and generally ripens in late summer to early fall. Its color usually ranges in tones from red to orange, but depending on the species, some “hips” may be a dark purple or even black.

Rosehips suggested uses include as a rich source of Vitamin C, with about 1700-2000 mg per 100 g in dried product; remedy for rheumatoid arthritis; reduces symptoms of knee and hip osteoarthritis; helps the immune system to fight off foreign invaders and out of control cells; facilitates fat metabolism; protects tissues from free radical damage; assists the nervous system by converting certain amino acids into neurotransmitters; prevents scurvy; protects joints and connective tissues; protects adrenal function; ability to prevent urinary bladder infections, and assist in treating dizziness and headaches; used externally in oil form to restore firmness to skin by nourishing and astringing tissue; brewed into a decoction, can also be used to treat constipation; and rose hips contain lots of iron, rose hip tea is used during menstruation to make up for iron loss.

Rosehip Syrup was sold commercially in the UK after the war by a company called Delrosa. English children were paid 3d per lb for rosehips harvested in the autumn to be made into rosehip syrup by the company Delrosa in Wallsend (near Newcastle). For many years after the war, Delrosa brand Rose Hip Syrup was supplied along with Delrosa Orange for babies, through baby clinics throughout the UK.

Rosehip syrup is both delicious and packed with vitamins, particularly vitamin C. It can be served over porridge, yoghurt or ice cream, diluted in a cordial drink, or as part of a cocktail.

Rose hips have varying levels of natural pectin, and if you happen to get some with a lot of pectin it can sometimes cause the syrup to become more jelly-like, especially after being refrigerated.