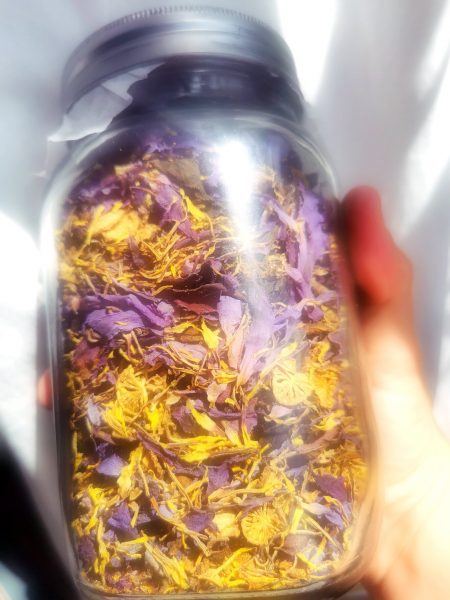 Blue Lotus Wine Infusion has a long history of use and adoration across the continents. It has been used by many cultures including those of the Egyptian, Mayan, Syrian, and Thai peoples.

The ancient Egyptian peoples are most well known for their love of the Blue Lotus flower, they have even discovered the flowers laid upon the body of King Tut inside of his tomb.

Women and pharaohs would wear head dresses adorned with Blue Lotus flowers and they had many uses for it in both social and spiritual practices.

Blue Lotus contains nuciferan (a natural anti-spasmodic) along with aporphine, which will give you feelings of calming euphoria. For that reason, it is a natural anti-anxiety and stress reliever. No wonder it was often used in ancient social gatherings. It has been reported to be useful as an aphrodisiac and to remedy erectile dysfunction (which might explain the ancient nude party scenes depicted in some of the carvings!). Perhaps its a modern-day Viagra as well. On a more medicinal front, Blue Lotus is used to treat gastrointestinal problems, diarrhea and dyspepsia, being a great aid for sleep and helping chronic stress.

This magical elixir (Blue Lotion Infused Wine) was concealed by the early Church for well over 1500 years. It’s true purpose long forgotten until interest re-emerged again in the mid 1800’s when archeologists began asking questions. They too wondered why temple wall carvings showed Blue Lotus flowers laying over earthen jars. No one guessed it was to steep flowers in wine for its touted euphoric and “mind altering” use

Its effects are diverse:

1 bottle of red or white wine (If using red wine opt for a Merlot, if using white opt for a dry white like Pinot noir).

1. The general ratio used is 30g of blue lotus leaf and stamen, to 1 bottle of wine. Pour out about a half a glass as this will make it possible to stuff your 30g of lotus in the bottle.

2. Grind your petals down (you can use a mortar and pestle, coffee grinder, herb grinder, food processor or even a sharp pair of herb or fabric scissors) use a thick neck funnel to stuff your foliage into the bottle. I like to use my nutribullet as it’s so much quicker and efficient.

3. After its all in, re-cork the bottle, and shake the bottle intensively before you place in the fridge. Keep the bottle in a cool, dark place and shake it once a day. This not only aerates the wine, but also allows more of the plant foliage to seep out into the wine itself, oxygenating the menstrual within the maceration process This is a process called “leaching” where the active contents are separated from the plant matter and absorbed into the carrier liquid (menstrum), in this case wine.

4. Keep your bottle stored well and remember to shake once or twice daily. Some people say the wine should be ready in 3-5 days, but if you want to get the most out of your wine infusion preparation, I recommend at least a week to two weeks. But if you only got to do it for 1-2 days its ok, it just wont be as strong. Make sure to properly label your bottle with the date of your infusion and the amount of lotus you used to keep track.

5. Once you’ve let your lotus extract into the wine for the amount of days you’ve chosen to, it’s time to filter. Using a fine mesh filter, or cheese cloth, or even an old t-shirt, is great. Make sure to press your muslin or cheese cloth to get every last squeeze of the lotus infused wine.

6. For you blue lotus fanatics, you’ll probably want to eat the pressed flowers. The lotus effects will come on in about the same time as the alcohol effects. Some feel more calm, relaxed and slightly euphoric when drinking the lotus wine compared to wine alone. When composing the drink, you can enjoy it as is, or top it off with blueberries, or blackberries to enhance a more fruity-sangria type flavor if you wish. Also adding about 20% sparkling water to make it more of a spritzer.

Don’t forget to share this Blue Lotus Wine Infusion with your friends and be sure to mention that is may lead to lucid dreams and or increased sexual activity!

Here are some other ideas on how to use Blue Lotus Flower:

Blue Lotus Tea:
Steep 5g of Tea in 250mL of water for 10 minutes. Squeeze all excess liquid out of the flowers if you can. Add honey or sweetener and enjoy this sacred tea infusion. 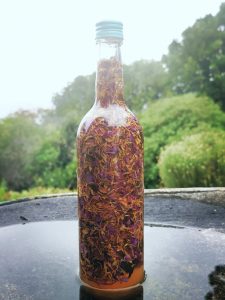