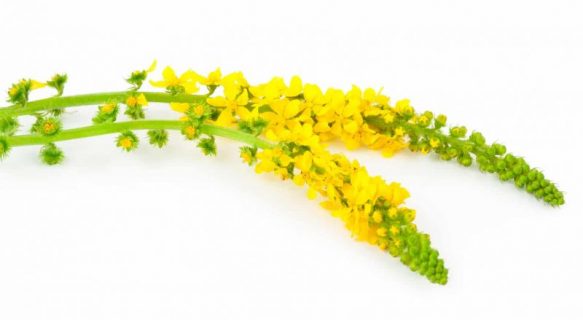 Agrimony has a very interesting history. It’s been used by witches to help get rid of negative energies. It was also used by Anglo-Saxon people to create charms. It was also thought to help bring a deep sleep. And while these uses may not be very popular today, they certainly give agrimony an interesting character.

The name Agrimony comes from the Greek Argemone, which means a plant that is healing to the eyes, although Agrimony isn’t often used in this capacity. Eupetoria is a reference to a king who died in 63 BC and was renowned for his herbal skill and knowledge. Also called Church Steeples for how the flower spikes stand up straight and tall, known as Cockleburr & Sticklewort for the burrs on the fruit that can stick to the fur of passing animals.

Health benefits of agrimony include:

One of the most well-known uses of agrimony is as a coagulant that can reduce bleeding in the body and help heal wounds. While menstruation isn’t a “wound”, per se, agrimony can be administered orally to reduce heavy menstrual bleeding and reduce inflammation to make those difficult periods a bit more tolerable.

As an anti-inflammatory agent, agrimony has often been used to eliminate digestive and gastrointestinal, particularly diarrhea and irritable bowel syndrome symptoms. By reducing irritation and inflammation in the membranes and tissues of the gut, it can significantly soothe the stomach.

The astringent quality of agrimony is said to make bladder control easier. Since it is non-toxic and has shown no signs of having negative effects on health, it is being given to children for generations with no side effects or issues.

When you are suffering from blemishes, pimples, rashes, acne, psoriasis, eczema, or any other skin condition, you can topically apply agrimony to the affected area and it can help to alleviate the issue. It can also be taken orally for the same effect. It works on irritation as well as blood eruptions that happen beneath the skin, like blotching and easy bruising due to its astringent properties.

Agrimony’s active ingredients, such as thiamin, quercitrin, and catechins, have been directly linked to liver and gallbladder health. By optimizing the function of the liver and gallbladder, the body can more easily eliminate toxins that have built up, thereby preventing more serious health issues and promoting overall metabolic efficiency.

Silicic acid is also found in agrimony. This unique compound is known to significantly boost the strength, appearance, and overall health of the nails and hair, preventing easy breakage or a dull appearance.

Agrimony has long been studied for its potential anti-diabetic properties, which would be a huge step forward in solving one of the great medical mysteries of our generation. Apparently, the active components moderate the glucose and insulin uptake processes in the body better than many other natural diabetes treatments.

In a similar way as reducing inflammation in the gut, agrimony is also widely used to improve respiratory conditions that may involve inflammation, such as sore throats, chronic coughing, bronchitis, and other sinus issues. For colds, coughs, and flu, it can be an effective way to speed up the recovery and healing process.

Agrimony has found a variety of therapeutic uses worldwide, throughout history. A research article on the history of basal cell carcinoma suggests that leaves and seeds of this plant were used for topical application against various health conditions including cancer and ulcers. A 2015 paper published in the Asian Journal of Pharmaceutical Science & Technology suggests that plant extract has antitumor properties.

Another 2017 paper also points towards its antioxidant and anti-inflammatory properties, which could help in neutralizing free radicals. Agrimony may protect against the free radical damage linked to cancer incidence.

One of the most common methods of enjoying this useful herb is by making tea. To treat diarrhea a cup of weak tea should be sipped up to six times a day. A stronger tea is used as a gargle to soothe sore throats and quiet coughs. To make the tea add one to two teaspoons of dried leaves stems or flowers to one liter of hot water and steep five to fifteen minutes depending on desired strength. For skin inflammation and to treat wounds soak a compress in very strong tea and apply several times daily. For skin issues essential oil may also be used. 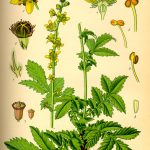