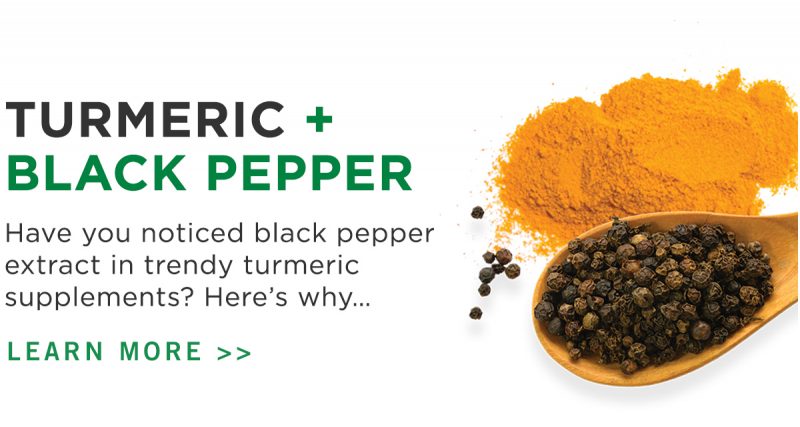 Why You Should Combine Turmeric and Black Pepper

Turmeric is a spice that comes from the turmeric plant. It is commonly used in Asian food. You probably know turmeric as the main spice in curry. It has a warm, bitter taste and is frequently used to flavor or color curry powders, mustards, butters, and cheeses. But the root of turmeric is also used widely to make medicine. It contains a yellow-colored chemical called curcumin, which is often used to color foods and cosmetics.

Turmeric is commonly used for conditions involving pain and inflammation, such as osteoarthritis. It is also used for hay fever, depression, high cholesterol, a type of liver disease, and itching. Some people use turmeric for heartburn, thinking and memory skills, inflammatory bowel disease, stress, and many other conditions, but there no good scientific evidence to support these uses.

Many find benefit to taking 400-600 mg of turmeric extract in pill form up to three times a day or as suggested by the label. Look for a supplement that is paired with black pepper to aid in absorption, or add black pepper with turmeric in culinary use. Try and get a product standardized for 95% curcuminoids.

Turmeric is an herb descended from the ginger spice family and is widely used throughout India, Asia and Central America to enhance the color and flavors of foods. Turmeric’s various medicinal benefits are highly associated with its active ingredient, curcumin. Curcumin is acquired from the stems of the herb and is widely known for its antioxidant and anti-inflammatory effects. Antioxidant and anti-inflammatory nutrients can play an important role in combatting inflammation, arthritis, and problems of the stomach, skin, liver, gallbladder, or certain cancers.

Research has shown that piperine, the main active ingredient in pepper, may reduce inflammation associated with chronic diseases like asthma, arthritis, chronic gastritis, and Alzheimer’s, according to a review published in January 2018 in Journal of Translational Medicine.

Why Does Black Pepper Help Turmeric Bioavailability?
Black pepper contains a substance called piperine, which studies show increases the bioavailability of turmeric’s antioxidant compounds by as much as 2000% Piperine enhances the beneficial effects of turmeric by making curcuminoids more accessible by the body. Experts say it does so in two ways, both of which are related to digestion.

First, piperine helps your body absorb more of the beneficial turmeric compounds by making it easier for those compounds to pass through the wall of the intestines and make it into your bloodstream. From there, piperine helps slow the metabolic breakdown of curcumin, so it stays in your system longer, increasing its bioavailability.

The best way to take advantage of these spices is to crush them up using a mortar and pestle and put them into capsules.

You can buy vegan empty capsules here and a capsules machine filler here.