It’s been used in traditional medicine for thousands of years as a natural aphrodisiac, sleep aid, and anxiety reliever.

Blue lotus flower is a water lily that predominantly grows in Egypt and certain parts of Asia.

The history of the blue lotus goes back all the way to ancient Egypt.  There, more than 3000 years ago, the plant had been widely cultivated at the banks of the Nile for its beauty and intoxicating effects. Considered a sacred plant, closely linked with Egyptian deities like Osiris, Nefertem and Ra, blue lotus had also been used as a religious sacrament, along with being a component of a recreational “feel good” drug.

From Egypt, the plant made its way into the rest of the ancient world, from the Roman Empire to Britannia and Greece, even getting as far as India. In time however, as the ancient world faded into history, the blue lotus flower had been forgotten. This changed when findings by archaeologists in modern times re-ignited the interest in the sacred flower from the Nile. In the early 19th century, with ancient tombs being discovered and Pharaohs being unearthed from their eternal resting places, researchers wondered about the numerous depictions of the blue lotus in almost all the tombs. It became clear that the blue lotus had a deep importance, and the flower of the Nile once again had rose into the spotlight.

It’s known as an entheogenic drug, which is a mind-altering substance believed to alter one’s consciousness in a spiritual or religious manner. This term is commonly used instead of “hallucinogenic” or “psychedelic”.

Some users also report a pleasant feeling of warmth around the head and upper body and a dream like feeling – as if the life itself were a waking dream.

The two main compounds responsible for the flower’s psychoactive and medicinal effects are apomorphine and nuciferine.

Apomorphine. A psychoactive compound that acts as a dopamine agonist, meaning it can instill a happy and euphoric feeling. It may also help with muscle control in those with conditions such as Parkinson’s disease and erectile dysfunction.

Nuciferine. A compound thought to act as an antipsychotic drug that induces feelings of calmness through mechanisms that aren’t yet fully understood. It has also been shown to improve symptoms of erectile dysfunction.

Consuming blue lotus flower may make you feel “high” and result in a gentle euphoria. Some people have drawn comparisons to the high you experience after consuming cannabis, though this can be largely individual.

The most common forms of the flower include teas, infused wine and spirits, and products to smoke or vape. 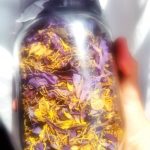 How to make a Blue Lotus wine infusion 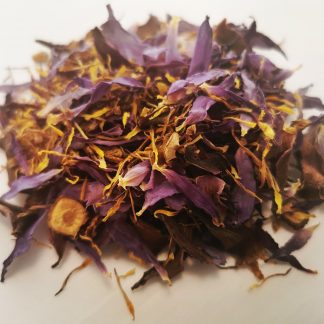