The first recorded use of Butchers Broom dates back to the 1st century AD and was popular in many folk medicine recipes.

In Europe the matured branches used to be bound into bundles and sold to butchers for sweeping their blocks, hence the name: “Butcher’s Broom”.

Modern herbalists primarily use butchers broom as supportive therapy for poor circulation, hemorrhoids, varicose vein syndrome, and other manifestations of leaky vein walls and poor venous blood return to the heart. For these conditions, it is taken internally. Although butcher’s broom will not cure these conditions, it is used to relieve symptoms such as leg cramps, pain, heaviness in the legs, swelling of the legs and feet, and it can strengthen vein walls. Butcher’s broom is also used externally as an ointment or suppository to treat itching and burning associated with hemorrhoids.

Butchers broom had been in decline as a medicinal herb until the 1950s. Then researchers discovered that an extract of the root contained two compounds, ruscogenin and neuorscogenin, that could constrict the veins in dogs and other laboratory animals. This improves blood flow and increases the strength and tone of those veins.

For centuries Butchers Broom had been used to treat a variety of health disorders: ancient improved the healing of the bone fractures, cured dropsy, urinary obstructions, kidney problems, jaundice and gravel with the herb’s remedies. Gout, kidney and bladder stones, as well as chilblains were also effectively reduced with Butchers Broom. Listed below are few of the health benefits of using butcher’s broom.

Butchers broom herb has a long history of use in treating venous disorders. Its active ingredients are ruscogenins. These compounds have anti-inflammatory and vasoconstrictor effects that are supposed to improve the tone of veins. Butcher’s broom extracts are used extensively (internally and externally) in Europe to treat varicose veins and hemorrhoids.

2. To Treat Edema Of The legs

Butcher’s Broom is quite beneficial for treating lymphedema and edema of the legs. It is said that the herb contains a component known as ruscogenin that has anti-inflammatory effects and is a venous vasoconstrictor. The herb is known to inhibit electrolyte re-absorption in the kidney to stop the process of edema.

Butcher’s broom is a traditional cure for varicose veins as well as other circulatory conditions. It has the ability to ease leg pain caused by poor blood circulation and other related symptoms (including swelling, itching, cramping, heaviness, tension and numbness). Other than poor circulation, irregular heart rhythm and other heart related problems can also be cured with butcher’s broom.

Butcher’s broom tea was useful to support healthy bowel function. Butcher’s broom is known to act as a mild laxative, a substance that encourages healthy bowel movements. This may help to deal with feelings of discomfort resulting from constipation. It is not yet recognized what causes this laxative effect, and research is ongoing in this area.

Orthostatic hypotension (also known as postural hypotension) is actually a condition where one’s blood pressure drops when arising from a seated or lying position. Chronic orthostatic hypotension can be a severely devastating disease in the elderly, in people with diabetes, fatigue syndrome, and Parkinson’s disease, and in people who take medications that affect the autonomic nervous system.

Because this herb has venotonic and vasoconstrictive action properties, butcher’s broom shows much promise in relieving symptoms of orthostatic hypotension. However, more research is needed.

In a research conducted in 1999, Butcher’s broom was effectively used to treat hemorrhoids and its symptoms such as itching and burning. The herb is accepted by the German Commission E for treating hemorrhoids. The herb is occasionally applied externally to the anus along with Witch Hazel.

European doctors have also used butcher’s broom for centuries to treat constipation and rid the body of excess fluid.

Butcher’s broom may benefit sufferers of various inflammatory conditions, including carpal tunnel syndrome, lymphedema swollen ankles and general swelling in the lower extremities. The herb increases blood flow, promotes circulation, strengthens blood vessels, reduces capillary fragility and prevents pooling of the blood in the legs. These properties give butcher’s broom the ability to relieve swollen lymph glands and alleviate swelling in the carpal tunnel of the wrist caused by repetitive motion. Standard dosage for treating inflammation consists of taking 150 to 300 milligrams two to three times a day.

The herb is used orally and in combination with Vitamin C & Hesperidin to treat leg ailments in humans. The usage of Butcher’s broom is promoted by the Memorial Sloan-Kettering Cancer Center for treatment against varicose vein under proper medical guidance.

The herb is known to tighten and contract blood vessels and capillaries in the body. Therefore, many clinical studies have shown the effectiveness of butcher’s broom to treat varicose veins. The herb can be used orally or can be applied topically to treat varicose veins. Varicose veins usually develop as a complication of pregnancy and overweight. However, pregnant women should not take this herb without consulting their doctors as there are no trials conducted to see the safety of the herb on the fetus.

Apart from the above benefits, Butchers broom also acts as a mild laxative and is diuretic in nature. Probably because of these effects the herb was traditionally used to treat jaundice, bladder stones, gout, gall stones and kidney problems. Research shows that the herb also helps in treating postural hypotension without increasing supine BP. Some say the herb can be used to fasten the healing of fractures and also can treat atherosclerosis.

Butchers broom root makes a pleasant tasting, golden colored brew that is good for those having trouble with varicose veins, edema, and swelling in the feet and lower legs. Broom also helps tonic the tiny capillaries under the eyes which will improve the look of dark circles under the eyes. 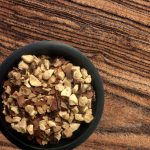 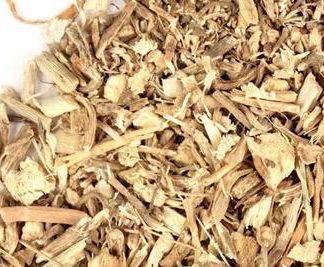