Silene Capensis (also called Silene Undulata) is an African plant of the carnation family. The root is called “African Dream Root” and is traditionally used as a dream-promoting remedy.
The dream enhancing properties of the African dream root have been used in entheogenic practices for hundreds of years. The Xhosa people of South Africa use the root to communicate with their ancestors, asking for guidance and advice through dreams. The plant plays a significant role in the initiation ceremony of Xhosa shaman.
Shamans use the plant to gain access to the spirit world through lucid dreams. The preparation, in which the root containing the agent is soaked in water overnight and the foam is taken the next morning, is called Ubulawu.

First of all, it’s a misnomer to call silene capensis a ‘herb’ at all, since the psychoactive components are contained in the roots of what is a flowering plant.

The main effect of African dream root is to induce vivid and lucid dreams, as well as enhancing the quality of sleep. Dreams become more intense and memorable, and with practice even fully lucid. Silene capensis enhances lucidity, but this state is easiest achieved by those who already have experience in navigating the dreamworld.

Now, to understand the dream root, you need to understand that dreaming is deeply embedded into Xhosa culture. Dreams are seen as gifts or messages from the ancestors – who are characterized as drifting ‘white winds’ or ghosts. The ancestors – via dreams – may impart healing guidance or knowledge to their descendents.

The most exciting development is this 2013 study which attempted to find the physiological mechanism behind the African dream root’s ability to induce unusual dream states. Although this study seems to have had serious funding shortages, it did manage to provide a pretty feasible hypothesis that saponids are the actor behind the root’s effects.

This would actually class silene capensis as an ‘AChEI inhibitor’ – putting it in the same category as galantamine and huperzine-A, both of which have become popular commercial lucid dreaming aids in the last decade.

There are two main methods of preparing Silene capensis. The first is the traditional method used by the Xhosa. To do this, the root is pulverized before being put into a cup container of water. The mixture is then whisked until a lot of white foam has been created. This foam is then ingested before sleeping.

The ‘foam’ method is the traditional way of consumption and the most common one. However, since Silene capensis is best taken regularly for it to take effect, the easiest way is to consume it in capsule form. To do this, you need to grind the root into a powder and put it in gel caps. Generally speaking, you want to consume between 500mg and maximally 3g a day, over a period of a few days. It is best to start with a smaller dose to get used to the plant, and work your way up. It is worth noting that a larger dose doesn’t necessarily cause a greater effect; for this reason 1g tends to be the settled on standard daily dose. Also, powdered Silene capensis oxidizes very quickly, so it is important to only grind it into a powder when preparing for direct use.

Care is needed to familiarize with the correct species identification: e.g., Silene undulata being Dream Root and Synaptolepis kirrkii referring to something else (“Dream Rhizome” it can be called), and that people should not use Ubualwu especially mixed together without the guidance of a trained and experienced traditional healer who is familiar with their use. 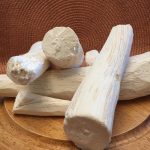