Available in 60g and 1kg options.

Lady’s Mantle herb is an unusual plant native to Europe and Greenland, it grows in cool regions and it is hardy for very low temperatures. It belongs to genus Alchemilla which comprises about 300 species.

With a history of use dating back to at least medieval times, Lady’s Mantle made its first appearance in a botanical tome named “The History of Plants” by Jerome Bock in 1532.

In the past, it was considered a magical plant and the dew from Lady’s Mantle was believed to be a part of the magical substance called the philosopher’s stone. The alchemists thought that water droplets collected from the leaves may turn some metals into gold and cure any disease. Hence, its Latin name – Alchemilla vulgaris – indicates its use in alchemy and vulgaris means common and refers to its ubiquitous nature.

In traditional herbal medicine it has been used for all manner of women’s problems including; menstrual issues, menstrual cramps, menopause, hormonal imbalances and to strengthen the uterus in late pregnancy. It was also used as a wound healer and as a remedy for various gastrointestinal issues.

Can be added to water or fruit juice and taken when required.

Traditionally Taken: 2-3ml taken 2-3 times per day, or as directed by a Herbal Practitioner.

It can also be added to salves for wound healing and a decoction or infusion of the powder can be incorporated  into soaps, lotions, creams and baths where astringency is required. 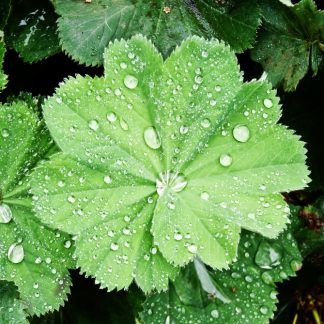