Use in very small doses for diarrhea and gastric upset and in larger doses for chronic constipation.

Rhubarb root Chinese medicinal uses began at least 5000 years ago, to when Chinese used dried roots as a laxative. The first documented uses in western civilization are 2100 years ago when rhubarb roots were an ingredient in numerous Greek and Roman medicines. Dried rhubarb roots are also astringent. The astringent effects closely follow the cathartic impact, which made rhubarb roots a popular laxative in days of old. Though uncommon, dried rhubarb root is still sold as a laxative. Therefore, it is noteworthy that the medical efficacy of rhubarb roots varies significantly by variety. The original Chinese variety remaining the most efficacious while some varieties have no laxative value whatsoever. Unfortunately, rhubarb hybridizes easily and there are no standards for the names of varieties or cultivars. This makes it very difficult to know the pedigree of any particular plant. Just calling it “Chinese” does not mean it is the same as the early strains.

Rhubarb has been used for medicinal purposes for hundreds of years. It is one of the most commonly used herbs in Chinese Medicine. Of all the many herbs cultivated for medicinal uses in early civilizations, Chinese Rhubarb remains one of the few which is still used today.

In traditional China, rhubarb root was used for curing stomach ailments, relieving severe constipation, and as a poultice for fevers and swelling.

Rhubarb root Chinese is harvested from rhubarb plants that are between 6 – 10 years old. The roots are cut and divided into cube shaped pieces to increase the surface area, thereby accelerating the drying of the roots.

Perhaps medicinal rhubarb is most commonly known for its astringent tonic to the digestive system.

When taken internally, larger doses of rhubarb is believed to work as a very mild laxative.

Rhubarb root chinese is also one of the main ingredients found in the famous essiac tea for cancer, along with Burdock root, Slimmery Elm and Sheep sorrel! 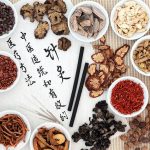