Steep 2-2.5 grams of the crushed rose hips in 150 mL boiling water for 10-15 min, then strain liquid before ingesting

If using in recipes, just add them to any wet ingredients.

Or you can rehydrate them by mixing with a little water.

WHAT IS ROSEHIP AND HOW DOES IT WORK?

Rosehip (Rosa canina L.) is one of the oldest plants. There is evidence that humans used it in prehistoric times. It was found in the area of Switzerland in so-called pile dwellings. These findings tell us that humans used it mostly in the form of jam and tea.

In fact, during World War II, the hips were carefully gathered and made into a syrup for the troops. The reason? Rosehips contain a great quantity of Vitamin C.

Rosehip suggested uses include as a rich source of Vitamin C, with about 1700-2000 mg per 100 g in dried product; remedy for rheumatoid arthritis; reduces symptoms of knee and hip osteoarthritis; helps the immune system to fight off foreign invaders and out of control cells; facilitates fat metabolism; protects tissues from free radical damage; assists the nervous system by converting certain amino acids into neurotransmitters; prevents scurvy; protects joints and connective tissues; protects adrenal function; ability to prevent urinary bladder infections, and assist in treating dizziness and headaches; used externally in oil form to restore firmness to skin by nourishing and astringing tissue; brewed into a decoction, can also be used to treat constipation; and rose hip contain lots of iron, rose hip tea is used during menstruation to make up for iron loss.

The perfect pick-me-up for colds and flu, simply dilute with hot water and honey. Or add water, fizzy water or lemonade for a refreshing summer drink. 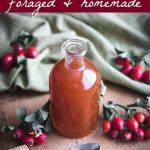 How to make rosehip syrup 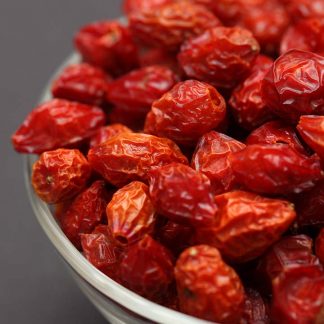