The leaves of American skullcap have been used in traditional herbal medicine as a sedative and to treat conditions like anxiety and convulsions. The plant was prized by Native Americans for its powerful medicinal properties.

Skullcap herb hails from the mint family, Lamiaceae, which is easy to identify by the characteristic square stems and the jagged edges of its leaves. This perennial thrives in moist, shady riparian habitats, from forests and thickets to meadows and marshes and is a native plant of North America. Scutellaria lateriflora, the native species we use, grows up to three feet tall and is adorned with dainty blue flowers formed by two tongue-like petals. Together, the petals were said to resemble the helmets of medieval European soldiers, hence its common name: skullcap. Farmers and collectors harvest the plants while they are flowering—the peak of their herbal power—then cut and dry the leaves and stems to use as herbal medicine.

Scullcap appears to have been introduced into traditional American medicine toward the end of the 1700s, when it was promoted as an effective treatment for the management of hydrophobia (hence the derivation of one of its common names). It later was used as a tonic, particularly in proprietary remedies for “female weakness.” The plant had been reputed to be an herbal tranquilizer, particularly in combination with Valerian, but has fallen into disuse. Scullcap has traditionally been used to treat nervousness, irritability, and neuralgia, as well as for its sedative properties.

While skullcap grew wild throughout Europe prior to the colonization of the Americas, the North American species was the first to make a significant mark on herbal medicine. European settlers and folk herbalists learned how to use skullcap from Native American tribes, who had traditionally consumed it as a tea to soothe the nerves. Herbal physicians then brought it back to Great Britain in the 19th century, introducing more people to its relaxing benefits. Today, herbalists use it for many reasons, but primarily to relieve tension, nervousness, and irritability associated with stress.

Supplementing with skullcap may provide several benefits, though research in most of these areas is limited. May boost mood and reduce anxiety. American skullcap has been shown to boost mood and reduce symptoms of anxiety. Contains anti-inflammatory and anticancer compounds. Both American and Chinese skullcap contain an array of beneficial plant compounds, including antioxidants, which have anti-inflammatory effects and protect your cells from damage caused by molecules called free radicals. Oxidative stress, which results from an imbalance between free radicals and antioxidants, is linked to a number of chronic conditions, such as certain cancers and heart disease. Notably, baicalin, a flavonoid antioxidant in both American and Chinese skullcap, has demonstrated powerful anticancer effects and may help combat oxidative stress.

Other potential benefits. Skullcap has been linked to several other benefits, including: 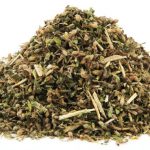 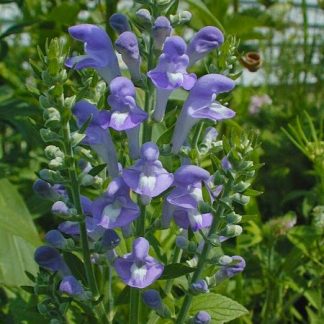