Infusion: Pour 1 cup of boiling water onto 1 heaped teaspoon of herb. Leave for 5-10 minutes. Strain and drink twice a day.
Tincture: 1 Heaped double handful of dried herb, in 1 litre of 43%-60% whisky or vodka. Placed in the sun for 14 days. 15 Drops in water 3 times a day.

The Latin name of this pretty little blue flowered plant Veronica Speedwell comes from a story of a woman, later canonized as St. Veronica who is said to have wiped the blood from the face of Jesus on his journey to Calvery.

Speedwell is considered to be diuretic, expectorant, stomachic, tonic. Speedwell was once a highly regarded in England as a healthy, relaxing, herbal tea and tonic. As with most astringent, bitter herbs, an infusion of speedwell can be used as a wash for troubled skin. Recent studies have shown Speedwell tea may be an effective preventative treatment for ulcers. It is most often used been used for coughs and congestion. Speedwell can be used in herbal tea cough remedies as an expectorant, and also has diaphoretic (sweat -producing), diuretic and tonic properties. The plant is rich in vitamins, tannins, and the glycoside aucubin, which has anti inflammatory, diuretic and liver protective actions. Speedwell extracts can be added to skin ointments to treat eczema and help heal skin irritations and wounds.

In modern herbal medicine, speedwell tea, brewed from the dried flowering plant, sometimes serves as a cough remedy or as a lotion for irritated or infected skin. The somewhat bitter and astringent taste and smell of speedwell led to its use as a tea substitute in 19th-century France, where it was called the d’Europe, or “Europe tea.” The French still use this term as a name for speedwell.

Emperor Charles, the Fifth of Spain, is said to have derived much relief to his gout from the use of this herb. It contains tannin and a particular bitter principle.

Although speedwell has a reputation, especially in Europe, as a healer of all illnesses, it is used primarily as an expectorant for respiratory problems. It has also been used for stomach ailments, migraine headache, and as a gargle for mouth and throat soars. The fresh juice taken in large quantities is helpful for gout, and it can also be used externally to relieve chronic skin problems. 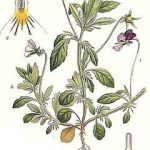 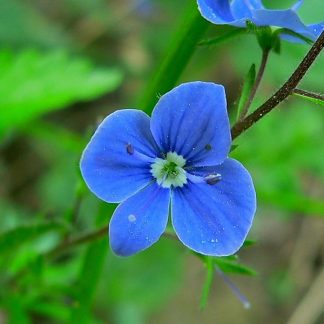